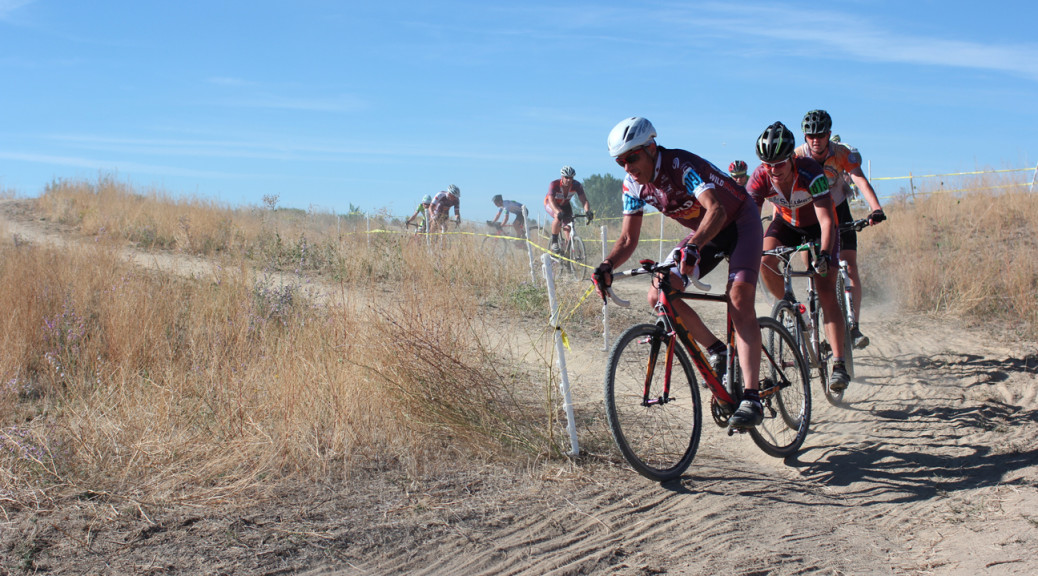 The local SW Idaho cyclocross season kicked-off with two races on 9/26/2015 & 9/27/2015, Idaho Wafflecross (#1) & (#2). Wild Rockies Race Team was represented at both races, and Weston and Fritz finished both races. Allis, Chris Ford and Gary joined this “ageless duo” for Wafflecross (#2), and they also posted respectable finishes.

The venue for these races was the Eagle Bike Park, and the course included two loops, the grass section with a pair of full legal size barriers, and the dirt section with copious loose dirt challenges. The weather for Wafflecross (#1) was too nice with temperature in the upper 80F range, causing dehydration exhaustion in some. The weather for Wafflecross (#2) was more comfortable in the mid 70F range, but still far from “crossy”.

The first cyclocross race of the season can be a shock to the system, unless you have had intense interval training leading up to the race. My body was not prepared for this level of intensity, and even though I had a good start, I was unable to hold my position after the loose dirt run-ups late in the first lap. I felt more comfortable and had a stronger performance on the second day at Wafflecross (#2).

The Wafflecross (#1) course was the most difficult I have seen. The pair of full legal height barriers on the grass section were placed immediately following a downhill left turn that forced early breaking and dismount just prior to the steep climb up to the road crossing. The dirt section had a difficult loose dirt run-up over the “berm” immediately followed by a loose dirt descent into the railroad tie stair run-up. After a brief descent, there was a loose dirt turn that led into the next loose dirt ascent of the berm, and this together with the loose dirt side-hill “down and back up excursion” that immediately followed cost me huge amounts of time, as I did not have the strength / skill to ride this pair of features, and they turned into another double run-up.

The Wafflecross (#2) course was roughly the Wafflecross (#1) course run in the opposite direction. The reversal of direction reduced the number of run-ups from four to one loose dirt run-up, and this is more on-par with cyclocross course difficulty I have experienced. There was still plenty of loose dirt difficulties, and a climb was added to the course to accommodate running the grass section in the opposite direction. The following photographs were taken at the top of this climb.

One thought on “Wafflecross number1 and number2”