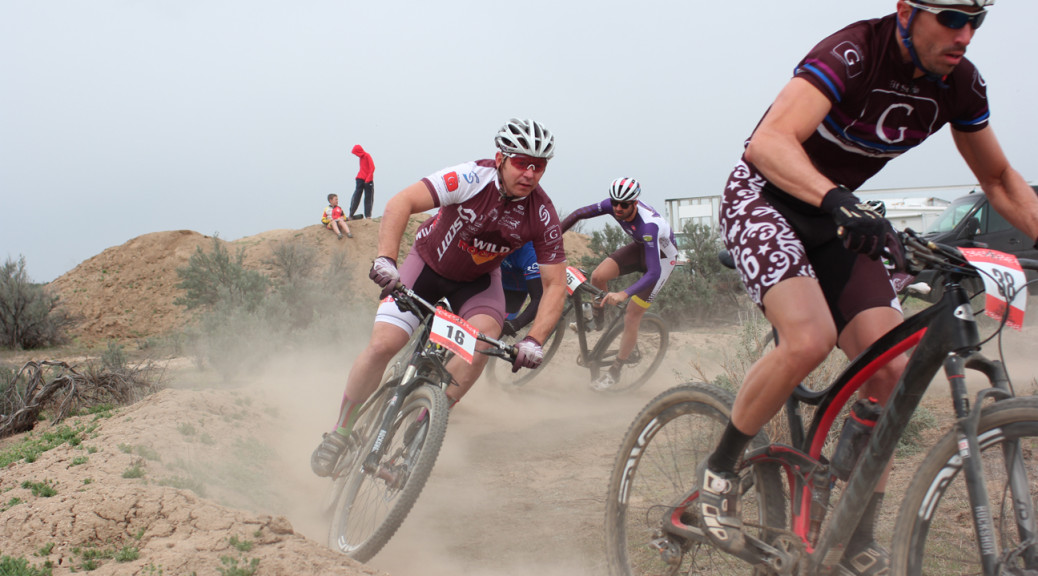 The course conditions were very dusty, as the course was very dry, and the riders were constantly generating fine powder with each passage through each flat turn. All the riders finished their races covered in dust with dirt on their teeth. During the first lap of the Cat 1 race, the dust kicked up by the first ~6 riders was so thick that the remaining riders could not even see the track. We had to follow the rider in front of us with no ability to pick a good line.

As the fine powder built up in the flat turns, they became increasingly “greasy” slippery, and many riders found that it was possible to accumulate even more dirt on their kit by “going for a roll”. I do not believe there was any serious injury, nor equipment damage. These conditions were an advantage for the skilled riders, as us less skilled riders quickly became overly cautions in the flat turns.

Not only did the first ~6 – 8 riders through the start of the Cat 1 race avoid the dust visibility problem, they also avoided the bottleneck that forced the rest of us to brake to a near stand-still before the first turn ~50 yards from the start. Hence they immediately gained ~30 – 60 seconds over the rest of the field.

I console myself over this frustration by observing that I was able to limit any additional time gains over the remainder of the race by the non-Pro race leaders to a similar amount.

The remainder of the Cat 1 race was very exciting. There were numerous Wild Rockies Race Team members and other fans cheering us on. All the racers experienced multiple near-crashes, or worse. Bike handling reflexes were tested, and adrenalin spiked with each incident. Darren was delayed mid-race when the race promoter’s son crashed in front of him taking both of them down.

Weston and Fritz’s battle for the Men’s Cat 1 50+ bronze provided the most exciting spectator action of the day. Mike led the cheering, and his lap-by-lap comments kept the whole crowd involved, even the officials and score keepers. Weston was ecstatic to beat Fritz, and Fritz was a bit disappointed, but Fritz learned a key lesson on how to launch the last lap pass.

Mike rode the Men’s Open Single Speed race, which was included in the Cat 2 race. Mike was the only Wild Rockies Race Team member in the Cat 2 race, and he missed the start by ~30 – 40 seconds. At least he did not have to deal with a track obscured by dust, nor first turn bottleneck. Mike spent the first half of his race chasing down slower riders, and then he led a strong group of four to the finish. Mike took fourth place.

The photographs included in this article were taken by Michele Swan. Most are quite nice. Apologies for the ones that are soft / blurry, off-center. To see / copy the full resolution available in these “quarter resolution” images, click or tap the images to bring-up the attachment page, click or tap on the image magnifier located between the image title / filename and the image, and then right click on the image to copy (on a PC). Instructions to purchase the full resolution photos are available at Fitness and Grace Photo.