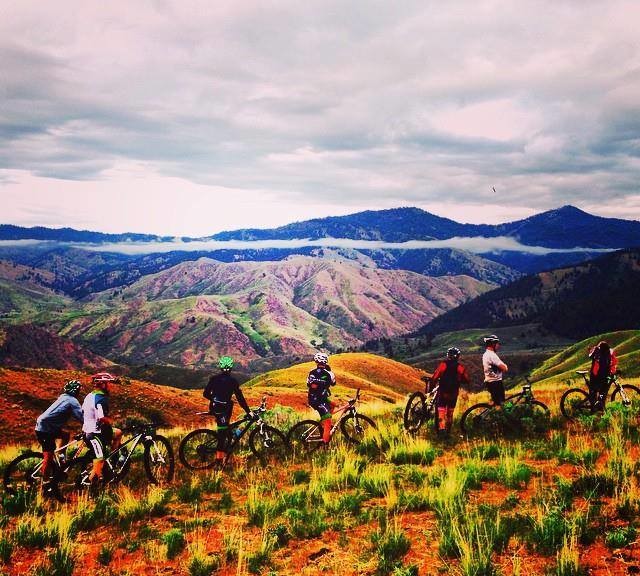 The Coyote Classic has the reputation of being the most technically challenging course in the region available to amateurs of all levels, and the 2015 edition lived up to this reputation. These technical challenges combine to provide significant advantage to those who are able to negotiate them most efficiently.

The May 16th race was treated with moist cool spring conditions. The race start was delayed 2.5 hours due to the possibility of morning rainstorms that could have made the course un-ride-able, but the storm bypassed the race venue. The weather conditions at race start were nearly perfect, 58F, overcast, 10-15mph west wind. Spring had come ~1 month early, and warm dry mid-spring conditions had raised concerns for an early, lengthy fire season. The 1+ week of moist cool weather that preceded the race brought a tremendous bounty of late spring flora including camas, lupine, cinquefoil, morels, syringa, choke cherry and much more.

The vast majority of the course is on active cattle ranch that provides unique character, cows on the trail including bulls, deep hoof prints that enhance trail roughness, wallow pits of soft sand, squishy cow pies that were still warm, bone yard, narrow trail along creeks eroded to barely tire width by cows climbing in / out of the creek.

Some described the course conditions as “Hero Dirt”, and indeed this was the case for much of the course, but there were enough moist and muddy sections to have significant impact. At race end, all bikes were heavily coated with mud and cow dung.

The course has two loops, the south shorter ~8 mile loop is the Cat3 course, the north longer ~16 mile loop is the Cat2 course, and the Cat1 racers race both loops with mass start that includes the Cat3 racers. Both loops have the same 3.3 mile finishing descent down Spring Creek, 100% single track, two wet rocky creek crossings and one bridge, constantly curving trail with limited visibility of the innumerable rock and root and brush obstacles, and to keep the racers on edge, multiple technical rock features that are easy to flub under race conditions, all have been ridden, but most racers choose to carry their bike over the biggest one.

After an initial climb, the Cat3 loop proceeds with a sketchy descent that begins with loose rock, followed by soft sand curves, a dip through some willows, a short very steep rise, then drops down onto the Broken Horn trail. This trail climbs up the creek bed, with initially moderate steepness, through the “rock sculpture” section, followed by short descent into tricky loose dirt sharp left steep climb-turn that leads into the steep “stair climb” section.

This stair climb section is ride-able (for experts), but any flub-up leads to walking the rest of the section. The trail then climbs out of the creek bed up into the “hills and dales” section, which is largely two-track trail that provides ample passing opportunities. Several hills in this section have pitches that are steep enough to test the climbing skills of Cat3 racers. The “hills and dales” section concludes with a “flowy” single track descent into the short deep mud section that leads to the top of the Spring Creek descent.

The Cat2 loop begins with curvy single track section that climbs up and over the ridge that separates Spring Creek from Bovine Nirvana. This section includes multiple technical features with the highlight being a curving bridge with a boulder in the middle that crosses a narrow gulch.

The penalties for failure to negotiate some of these technical features can be more severe, as Fritz experienced during practice 10 days before the race and led to a DNF and trip to Emergency Room for Andy. The climb from Bovine Nirvana up to the Willow Creek trail head is moderately steep, pocked with cow hoof prints, and long enough to burn up fuel needed for the upcoming main climb up Willow Creek.

The beginning of the Willow Creek section is usually fast, but on this day there were several muddy sections that slowed pace and increased effort. The Willow Creek crossing was deeper than usual, and the immediate left turn up the steep bank had to be anticipated. After a couple of switch-backs comes the next bridge, and it has tricky entrance and exit that need to be anticipated.

The trail up Willow Creek begins with moderately steep pitch, but constant attention is required to maintain speed and negotiate obstacles leading to the hike-a-bike up and over a rock outcrop. After a short section of more high speed obstacles comes a pair of features, the first being ride-able and the second most successfully walked (for me), and the lower Willow Creek section concludes with a moderately steep climb up to the cross road.

The upper Willow Creek climb is where the course often turns racers into strugglers, and this is where the wildflowers are most abundant. This section starts with a deceptively wide trail and pitch on the low end of moderate steepness, but this soon transitions to moderately steep single track with sections of single tire width single track. Midway up this climb is a pair bridges followed by a short very steep pitch out of the creek bed that signals the start of the steep soon to become very steep upper climb.

Up to this point, most Cat1 racers have been able to maintain full race pace, but this soon becomes impossible for racers who have not fueled and hydrated sufficiently. My estimate is that I needed to have consumed two “Goo” packets and drank a large water bottle, but I had only drank ~half a large water bottle and consumed no “Goo”, and I bonked.

This is where you realize that you are out of gas, and cramps start to set-in, but you have to push yourself remembering “if this is hurting me, then it is also hurting the competition”. Then you get to the ridge top road crossing which is not the top of the climb, as there is an immediate short steep climb, followed by short very rough section, followed by short very steep climb back up to the ridge top road. This leads to the final section of single track before the rough two track descent.

I have struggled with this final section of single track, and I have also seen others struggle. It starts with short moderate steep climb, and then becomes downhill-flat fast. I suspect the struggles are due to fatigue / lack of concentration on narrow curvy trail with obstacles. The long two-track descent from the “power line” ridge down to the start of the Spring Creek descent is very rough and very fast for those with skill / strength / confidence.

We owe big thanks to Hal Miller, Tim Phillips and all of Broken Spoke for putting on this event, spearheading the development and maintenance of the race course.

Unfortunately, Michele was not available to take photographs. If anybody has any Coyote Classic photos (i.e., practice or race), please add to website Media Library, or send to me, and I will attach to this post.