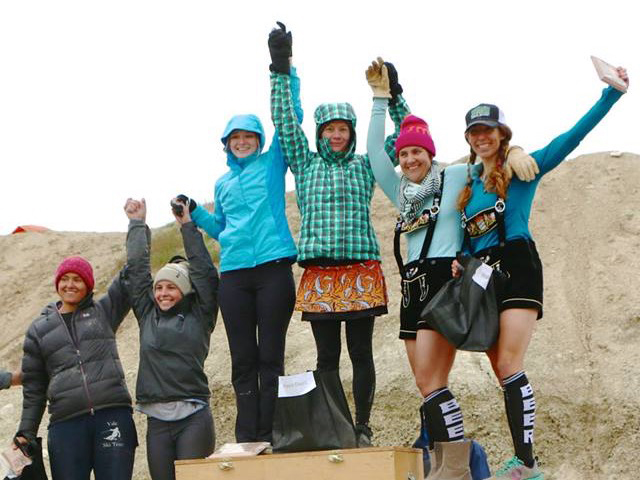 A rainy night left a muddy track; the venue was in a bentonite clay  mine. For 12 hours,  clouds, rain, thunder formed a circle around the course. On lap one positioning was key.  The track was entirely single, started downhill into a short technical climb and prickly pear cactus was abundant. The shotguns went off and the Pro Leisure team dominated 8 of the first 10 positions. I was in 11th and held this position until the group was strung out.

The wind picked up throughout the day, drying out the track making it faster and more exciting each lap. We dominated, no women passed me and I was able to pass many people. The top downhill speed was 35 mph, the course was 8 miles long.  About 3 pm we were leading 2nd place women’s duo team, the Mud Honey’s, by 2 laps. At 5:30 we were leading by 1 lap. It was weird losing laps to another team yet never being passed. On my 6th lap I was throwing up bile and according to the lap board we didn’t need to keep racing to win.

Quitting unless you are forced isn’t a good idea, so I went out anyway. . . took my time, checked out the view and used it as a cool down. Right before an awesome DH section two people were gaining on me, I was not going to let them pass me before the DH so I busted a gut maintaining my lead. One turned out to be a Mud Honey and the 2nd place women’s duo finisher. According to the results I finished 30 seconds in front of her but I did not see her at the finish line for some time.  Perhaps that was a VERY long 30 seconds for me, but doubtful.

Racers gathered for awards.  Em and I looked at the score board; we were tied for 13 laps with the 2nd place women’s team.  How did that happen? Miraculously the Mud Honey’s gained two laps between 3-7pm yet never passed me . . . Em asked the USA official and he said, “So what? You won right?” I asked the women’s team if they did 13 laps? Smuggishly they replied, “Yep!”. Their sneakiness did not pay off, we kicked their underhanded booties.

“Lets race together, it will be fun!!” That was Em’s encouragement. I saw her for approximately 1.5 minutes of the 12 hours as we exchanged high fives and encouragement.  Needless to say, we won and it was cool. I know that quality of equipment, flat tires, course style, nutrition, level of competition all come together and a win is both preparation and luck. Winning a race after so many years off is rare and it was AWESOME!