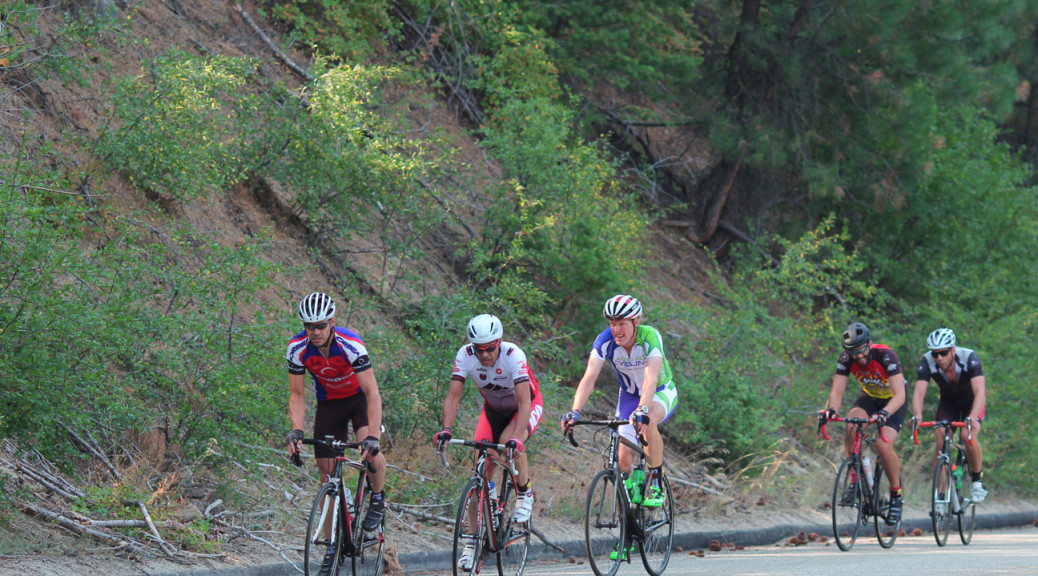 Once again, the 43rd annual Bogus Basin Hill Climb attracted the largest and most competitive field in the region for a single day amateur cycling event. It is the measuring stick by which cyclists compare themselves. The event is mass start, but with individual timing for both start and finish, and there are no awards or prizes other than bragging rights over your time.

The course is 15 miles of chip seal pavement along Bogus Basin road from the North End of Boise up to Bogus Basin Ski Area. The course starts with a two mile climb, features 12.5 miles of climbing with an elevation gain of 3400 feet, and finishes with a 1.5 mile flat section. This year’s event was held on August 15 under perfect weather conditions with a temperature of 65F at the 9:30AM start.

The BBHC attracts cyclists of both persuasions, even though it is not either. Wind resistance is a major factor in all other road races, but it is only a minor factor in BBHC, so drafting and aero bike position are not very significant. The predictable paved surface provides no dividends for the technical bike handling expertise of the off-road cyclists. The ~1 hour climb requires specific training by all, and most participants view BBHC as more than an annual event, the highlight of the annual cycle.

This year’s winner is local top racer Kai Applequist with a winning time of 54:24, which is typical of recent winning times. The second place finisher is local U19 phenom Ethan Reynolds at 4.5 seconds back. Third place was taken by Ketchum, ID, resident Richard Feldman who is M45-49 World Time Trial Champion at 16.5 seconds behind Kai. Fourth place was taken by local two time Olympic Gold Medal Time Trial Champion Kristin Armstrong-Savola at 52.7 seconds behind Kai. The fast group of the next eight riders finished 1:50 behind Kristin.

In addition to BBHC, I have also ridden in a couple of recent Individual Time Trial events with Kristin and Richard, and their results in flat ITT have been equally exemplary. I know that Kristin is going to the World Championships in Richmond, Virginia, next month. It appears that her preparations are on track for an ITT podium finish, and hopefully, this will earn her a spot on the 2016 USA Olympic Cycling Team. It also appears that Richard is on track to defend his M45-49 ITT World Championship.

[Author Note / Update: At the time when this Post was originally published, the author had not heard that Kristin just won the Women’s USA Pro Challenge Individual Time Trial by 0.2 seconds. Subsequently, Kristin extended her GC lead by finishing 3rd in the Stage 2 Loveland to Fort Collins “Rist Canyon” foothills road race, and then Kristin and her Twenty 16 Team controlled the final Stage 3 Golden circuit race to assure Kristin the overall yellow jersey for the inaugural Women’s USA Pro Challenge.]

Westin and myself were the only Wild Rockies Race Team BBHC participants, and we did not make the top ten Overall. I was not able to compete against my personal best from last year’s BBHC, as I lost five weeks of training due to sickness in late Spring, and I had not yet regained my mid-Spring form. However, I was able to make the best possible race effort: good warm-up without burning-up too much energy; consumed energy gel packet and big slurp of water 15 minutes prior to race start; good start, joined group of equal strength riders, and made it to half way mark without over / under doing it; consumed another energy gel packet and more water on the mile 10 flat; finished stronger than the rest of my group.

I finished 3rd out of fifteen in my 60-69 age group, 2:08 off my personal best, 4:00 off my season goal and nearly 7:00 ahead of Westin. (My wife has pointed out that I can continue working toward my season goal until Cyclo-Cross season starts, as I already took my September rest in June.) Westin finished 17th out of 33 in the M50-59 age group.