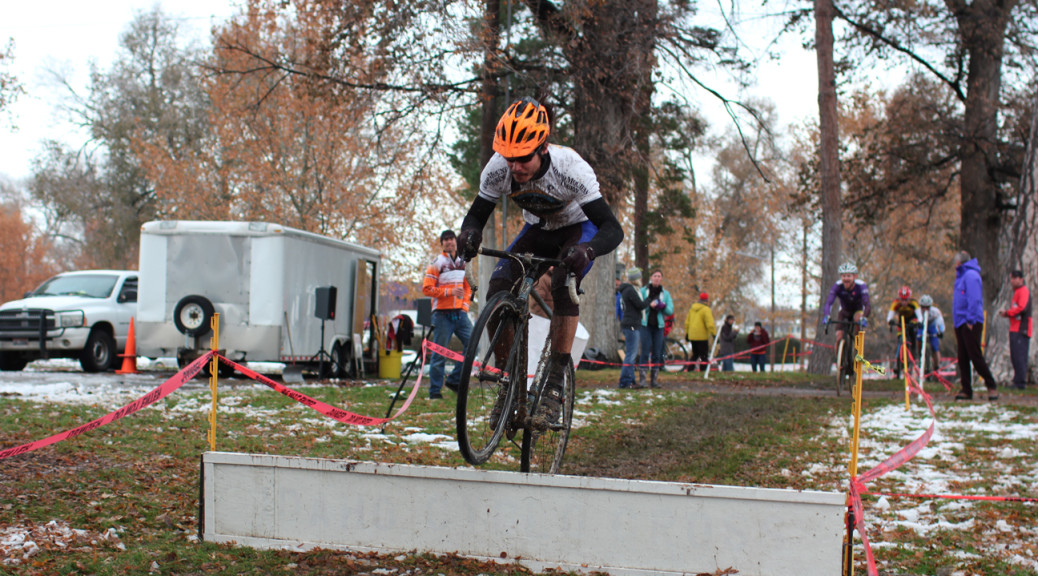 I decided to try cyclocross last Fall, primarily as a means to carry race fitness through the Fall and cut the off-season in half. I knew there exists some amount of fanaticism over cyclocross in some of the European low countries, but I thought this was a figment of European patriotism attempting to glorify their dreary Fall weather when little else was on the Sports Entertainment calendar.

Since I already had 6 months of Cross Country and Road Race fitness, my cyclocross race preparations were minimal: procurement of cyclocross bike; outfitting it with tubeless cyclocross wheel set, eggbeater pedals (identical to those on my cross country bikes) and Garmin speed – cadence sensor; and attending two Boise Cyclocross Skills clinics.

The local cyclocross race format combines all Women and Master Men categories in the same race (i.e., my category is M55+). As I was ill-prepared, I found myself behind all the first lap bottlenecks and battling with a group of three Junior High School girl BYRDS to pass (Boise Young Rider Development Squad). As soon as I passed one of these riders, the other two would actively block in the technical features, and take advantage of my poor technical skills (especially re-mount / clip-in) to re-form their group ahead of me. It took half the race before I figured out how to pass this group. Even though I was badly “chicked” (i.e., beaten by Cat3/4 Women), at least I avoided being “baby BYRDed”.

In addition to my baby BYRD battles, I had several other encounters / battles on the race course, each being decided by technical features. After crossing the Finish and catching my breath from a 45 minute full-on effort, I found myself in a group of recent finishers who were all laughing and joking with each other over their battles, and there was little concern about race winners, individual placing. All were commenting about how much fun the race had been, and asking each other whether they will be at the next race.

Cyclocross races are often held in municipal parks on surfaces that include grass, dirt, sand and interconnecting park pavement. The courses are often configured in a pseudo “figure eight” with the finish at the middle and the connection between the first and second loops being routed near the finish to provide the spectators two passes per lap. The center of the course often coincides with park restrooms, pavilion and / or parking lot lined with supporter awnings to provide some relief from the occasionally inclement / “crossy” weather, and the race promoters / directors typically arrange / provide modest hot food (waffles, cider, soup) to warm the spectators / riders from their exposure to the elements. Of course, the beer sponsor always has beer available by the end of the first race to enable recovery from dehydration.

The race format typically includes at least three races: 45 minute Cat4/5 Men; 45 minute All Women and Masters Men; 60 minute Cat1/2/3 Men; and possibly kids / juniors / first timers race. The race course is typically ~7-10 minutes long (depending on rider strength / skill), numerous technical turns are always included, various technical / strength features – some of which may be ride-able by the best riders – are also included (e.g., barriers / hurdles, sand volleyball courts / beaches, stairs / steep hill run-ups), and the course is often not available for review / pre-ride until ~1 hour before the first race. The beauty of the race venue and format is that it encourages riders and spectators to take-in all the races and socialize, rather than arrive / depart for their particular race.

Cyclocross is catching on in the USA, but the fans are limited to the riders and their families and friends, and their behavior is somewhat restrained in comparison to European fans. In the European low countries, each community / region cherishes their day on the cyclocross calendar, and many of the locals turn-out to cheer their local riders against those of the neighboring communities / regions, sometimes rather disparagingly if they are not keeping pace. There is much festivity, traditional local attire, cowbells – occasionally with the “prettiest” cow attached, alpenhorns, yodeling, oompah brass bands, accordions, and of course the outlandish local icon costumes (these local icons are often mythical popular figures from >150 years ago prior to any photographs or recordings, so historical accuracy is not particularly relevant).

As I begin my second cyclocross season, I am practicing cyclocross skills as much as my 60 year old body will allow. I believe I have improved from “poor” to “marginal”, and I am now beginning to appreciate the ballet-like finesse of the skilled riders as they appear to glide over / up / through the technical features. All these riders have invested much in developing their cyclocross skills and fitness, and they all do it for the love of the sport and surrounding culture. There is no conceit. All the riders want to get to know you, follow your progress, grow the sport.

Cyclocross races are short in comparison to road races, but similar in length to criteriums and time trials, and much longer than track events. Cyclocross races are sometimes referred to as “grass criteriums”, but there is no significant drafting effect in cyclocross and no “sitting-in” for a “breather”. Cyclocross racers must go full-on for the entire event to contend, as in the time trial, but time trials do not include the technical aspects. Another significant aspect of cyclocross is that the sprint is at the start of the race to avoid / minimize being caught behind the first lap bottlenecks, and this demands development of race start strategies / alternatives that are unique for each course.

The first cyclocross race and / or the first race of the season can be daunting, as going full-on at ~100% of cardiovascular maximum for 45-60 minutes while consistently finding the fastest lines through innumerable technical turns and getting over / up / through dozens of technical features is not something most of us are able to replicate in training. However, I have found that even a 60 year old body adapts to this after the first race or two.

Cyclocross thrives on inclement weather, as this places even more emphasis on technical skills, and cyclocross is the only cycling discipline in which inclement “crossy” weather increases event participation. SW Idaho’s semi-arid climate prevents some cyclocross events from including the muddy conditions that are often featured in the European and Eastern USA cyclocross events, but we have an alternative, deep loose dusty anhydrous dirt (i.e., resists packing), and this actually broadens the range of course conditions we get to experience.

Falling in cyclocross is a common occurance, but these falls are akin to falling while skiing, rather than the painfull, injurious, equipment damaging crashes that occur on pavement. When you fall during a cyclocross event, it is more likely you will be subjected to heckling from your comrades, rather than pity.

One thought on “Discover Cyclocross”