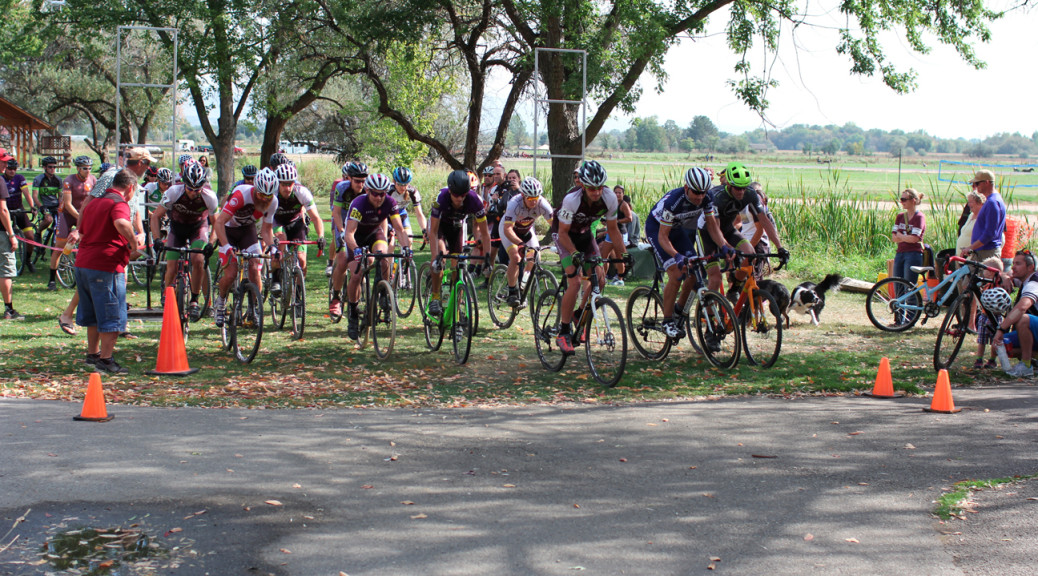 The 2015 Eagle Island Cyclocross Race was the 13th annual edition of the longest running cyclocross race in the region. Over the years, the Treasure Valley Cycling Club race promoter had dialed-in the course to the State Park, so most participants thought they had a good feel for what to expect from the course. To everybody’s surprise, the Park arranged to bring in a crane during the race to string their new zip line feature, and this forced last minute re-routing of much of the course.

This re-routing removed one of the three technical features (the slippery railroad tie stairway run-up), and a straight dirt road and straight pavement detour by-passed the scenic Back-end turns segment (including some turns in new terrain that were supposed to be the new addition to this year’s course). Luckily, there was enough of a West wind that drafting was significant on the detour. Several people pointed out that even though drafting is typically not significant on our local cyclocross courses, it is often significant on European courses.

The Autumn ambience in the park together with the mid-60F degrees and 10-15mph west wind weather was delightful, and although not “crossy”, it brought out more spectators.

Wild Rockies Race Team was represented by Darren in the Men’s Cat1/2/3 race, Chris Ford and Fritz in the Men’s Cat4/5 race, and Allis in the Women’s Cat3/4. Flats were a problem for the WR Race Team and many others, as the dirt areas bounding the parking lots are prime Goat Head habitat. I know that as a result, there are a number of new tubeless tire converts. Darren was among several tubular tire users that found Stan’s sealant does not work as well in tubular tires as in a pure tubeless set-up.

Chris, Fritz and Allis rode in the early race (Cat4/5 Men, Cat3/4 Women, Masters45+ – the oldest Masters category). The following photo shows Fritz midway up the steep climb out of the Front section of the course on lap1 (the second climb on the course) with Chris six riders back on the bottom of the climb.

The two Front section climbs together with the intervening section of side-hill off-camber turns covered with leaf fall provided ample opportunities for separation. The race leaders in the early race and many of the racers in the late race (Men Cat1/2/3, Masters35+, Women Cat1/2) took the Front section exit climb at a pace that made it look like the rest of us were moving barely fast enough to keep from falling over. The descent from this climb led to the Sandy Beach section of the course.

The rolling turns that led into the Sand segment culminated with a severe off-camber wet / muddy turn that demanded caution. The Sand segment began with ~50 meters of deep sand followed by ~75 meters of wet sand along the waters edge, and then came the 90 degrees turn in deep sand that led up across the beach. This deep sand turn un-mounted many of the less expert riders.

The following two photos show Fritz and Chris a few seconds apart on lap2 dealing with the six inch pipe that bisected the wet sand segment.

The next three photos show Fritz negotiating the energy sapping 90 degrees deep sand turn. While the deep sand was difficult, it was easier to ride than last year.

Of course, it takes even more energy and time for an un-mounted rider to cross the beach. Here is Allis, who like many, found themselves pushing their bikes through the deep sand.

Chris and Fritz rode the lap2 Backside section together until Chris flatted out of the race on the Detour segment. Fritz went on to finish in the middle of the Men’s Cat4/5 field, 16th out of 30 finishers, and Allis finished 16th out of 18 finishers in the Women’s Cat3/4 field.

The Cat1/2/3 Men’s field included several very strong contenders led by Richard Feldman (blue and white durance Colnago kit with World 45-49 Time Trial Champion arm and leg stripes in the following race start photo). Darren competed in this field (second row on the right), and he confided during warm-up that he expected the race to be “very tough”.

Unfortunately for Darren, he flatted on the Backside section of lap1 and lost several minutes before he was able to make it to the pit and switch to his spare mountain bike. Darren rode strong for the duration of the race, but he was not able to close his lost time gap, somewhat hindered by his mountain bike.

The Finale section of the course followed the Detour segment of the Backside section and featured a triple barrier climb up to the ~50 meter finish straight-away. These barriers were well under the full legal height, but they were placed close enough together on a short uphill immediately following a 90 degrees turn that nobody attempted to jump them.

Darren finished last of the Cat1/2/3 finishers, but he appreciated the “great workout” and was anticipating upcoming cyclocross events, Crosstoberfest and Pine Creek.