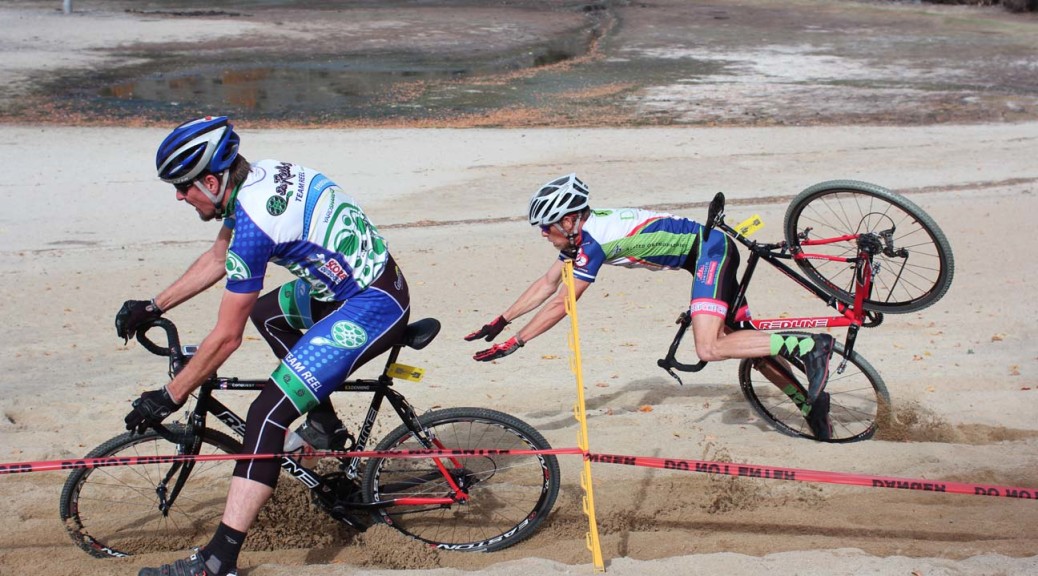 The weather and course conditions had been “crossy” during the preceding week, but the weather and course dried out for the October 24 & 25 inauguration of the 2015 SICX Series. The Saturday events were baked with low to mid-60F temperatures, and the Sunday events received a reprieve of ~10F cooler temperatures due to overcast conditions that prevailed until mid-afternoon. Both days saw breezy conditions that were strongest in the morning.

The venue at Sandy Point State Park at the foot of the Lucky Peak reservoir is unique in that it sits in the Boise River watershed, refreshed with cooler air that spills over the dam, blanked with a thick layer of black topsoil that is found no where else in the Treasure Valley, and includes a diverse assortment of mature trees including hardwoods and native trees from across the state. These trees provide: ample opportunities for off-camber turns with “root roughness”; leaf fall to hide the roots and holes, as well as decrease traction; acorns to act as ball bearings on side hill cambers; beautiful Fall Color.

The courses were ~97% grass and were essentially the same course, but run in the opposite direction. To my surprise, neither course included barriers, and it was possible for the better racers to complete the course with a single dismount / remount per lap.

The park has adequate undulations that the course architect (Alex Phipps) was able to lay out a course that not only seemed like you were always going up or down hill, but often included turns that made it difficult to carry the downhill momentum. And there were ~50 turns, many of which were off-camber, side hill, decreasing radius, and the technical difficulty would have been high, if the course had been wet. As it was, the course tempted racers to take the turns a little “too hot”, and this led to some of the best racers laying their bikes down.

The lower flat section of the course was anything but a chance to catch your breath, as it included three deep sand volleyball pit crossings separated by a ~dozen turns including 90 and 180 degree turns at the entrances and / or exits of the pits. These pits are bordered with a ~foot high berm that encouraged face plants upon entry and bogging down upon exit. The deep rut was the fastest line through the pits, but the drop from the berms into the increasingly deeper ruts demanded expertise.

The courses were ~1% deep sand. In addition to the deep sand volleyball pits, there was a deep sand beach run each day. The Saturday beach run was shorter than the Sunday beach run, and there were a few racers on Saturday that were able ride the beach. Interestingly, it was the middle of the field Cat3 racers who I saw ride the beach (Adam Karch, Andrew Shaber, Ryan Faber and Michael Shaw), not the Cat3 race leader (Andrew Harris), nor any of the Cat1/2 racers, so I suspect that running the beach was more efficient. Certainly, this was the case for the Sunday beach crossing, but the persistent Sunday hecklers were able to encourage some racers to attempt to ride the beach, and I saw one succeed (but I failed to notice who).

One feature of the beach runs was downhill entrances bisected by an asphalt path crossing that tempted the racers to ride down into the deep sand rather than dismount before the asphalt path. This led to several inglorious dismounts on the beach.

These courses provided plenty of cyclo-cross action without any barriers nor crossy conditions. Note there will be two more cyclo-cross races at this same venue on December 12 & 13, SICX (#5) & (#6). The course and / or weather are likely to be “crossier”.